Please NOTE the PPR file (which stores the project specific Data Pathway settings and Data Script) has changed format with this build, to accommodate the new options. Thus after using MDS version 9.0.8.0 there is no return to the PPR file of the previous 'public' MDS 9.0.6.0. Thus it is advisable to backup the PPR file before running a project in MDS 9.0.8.0.

Prevention of duplicate/replicate sessions in MDS Database and processing due to mobile client side connectivity timeout and other possible causes. Large MDS databases, as mentioned above, combined with slow mobile network connectivity, may cause a session received at the MDS Database to not be transferred from the Active to the Sent folder on a mobile client device. In MDS version 9.0.8.0 if a client attempts to send a session to the server, and the server already has exactly the same session: • Same GUID • Same Created and Saved times (in milliseconds) • Every point has the same value; then rather than creating an exact duplicate session on the server side, the server silently tells the mobile client that the session was received and transfers the session from Active to Sent folder. This way, failed client-server synchronisation won't result in duplicates when the client tries again. No upgrade is required for MDS client sides for this function.

UltraDrop Dynamic Data interuptions are now reported in the wireless and text Log rather than a popup message that may block the application (saving of project).

Fixes for Android mobile client. Fixed failure of serial use of Print point in Android with the same content presented to PrinterShare. Fixed failure of Settings URL for Purge of Sent and Deleted Sessions, in some versions of Android.

Download Upgrade: CreativityCorp recommends all Mobile Data Studio users upgrade to version 9.0.8.0 via Customer Login. In Project or Database 'Setup' menu enable 'Offer Mobile Data Studio upgrades' to connecting Android and Windows 10 Tablet devices. There is no cost for the upgrade to version 9.0.8.0. CreativityCorp provides support for users of current version of MDS.

Data captured via Mobile Data Studio is often processed to Microsoft Excel. However, Excel doesn't respond well to automated insertion of images, and if it did, spreadsheet layout might be distorted. Mobile Data Studio version 9.0.6.0 now provides three options when processing session data with images to Excel as shown below; being no output of images, save with display of image filename, or save with hyperlink to image. Also shown below is an example of a session processed to Excel with a hyperlink to a saved accompanying image from a Camera point.

The Data Pathway in Mobile Data Studio can automatically and reliably process hundreds of sessions from Mobile Data mobile client devices, via ADO to databases, to XML and to HTML. In the rare event that a session failed to process to an external media it assists to identify which session or sessions failed to process, so the session can be resent to the target media. Mobile Data Studio version 9.0.6.0 adds a diagnostic function to the server side Database window which identifies the 'State' of sessions as either 'Processed' or 'Failed'. Before a session is classed as 'Failed', three attempts at processing are made at 60 second intervals. Tap to the top of the (State) column in the Database will sort 'Failed' sessions to the top of the column for attention.

Mobile Data Client for Windows 10 project upgrade via TCP/IP has been fixed (upset by Windows 10 ‘Creator’ upgrade) and there is improvement in project page scrolling, with less device related variation.

Mobile Data for iOS version 9.0 (build 937) is available at the Apple App Store and is iOS 11 and above compatible. This is an essential upgrade for iOS 11 and iPhone X users as it overcomes hangs associated with 'pop up' notifications for some points and functions.

Mobile Data Studio version 9.0.2.0 adds a function to 'rescue' a project from a mobile device (Android, Apple, Windows 10 Tablet) should the matching project be lost or corrupted on the Mobile Data Studio server side. To use the project rescue function, select a connected mobile device in the Wireless Activity Window and open Properties to 'Double-click a project to download it from the unit'. Users of Mobile Data Studio server side on high resolution screens can increase font size of text in Database Window by a 'Large Font' control in the Database Window control panel. See images of these functions below.

CreativityCorp recommends all Mobile Data Studio users upgrade to version 9.0.2.0 via Customer Login. In Project or Database 'Setup' menu enable 'Offer Mobile Data Studio upgrades' to connecting Android and Windows 10 Tablet devices. There is no cost for the upgrade to version 9.0.2.0. CreativityCorp provides support for users of current version of MDS.

The Mobile Data Client for Windows 10 is pitched towards the growth of Windows 10 based ‘detachable and convertable' notebook PCs and tablets. This reflects a trend towards ‘two-in-one’ devices replacing laptop PCs in the office and then the keyboard being removed to take a tablet to the field. Ruggedised industrial tablets also use Windows 10 in enterprise and government deployments where Windows may be preferred. The Mobile Data Client runs on tablets with Intel processors, not Qualcomm processors. Thus all major mobile platforms are covered by CreativityCorp and Mobile Data Studio going forward. Below are shown a tablet from an ASUS 'two in one' notebook device and a rugged Mesa 2 tablet from Juniper Systems; displaying projects running in the Mobile Data Client for Windows 10. 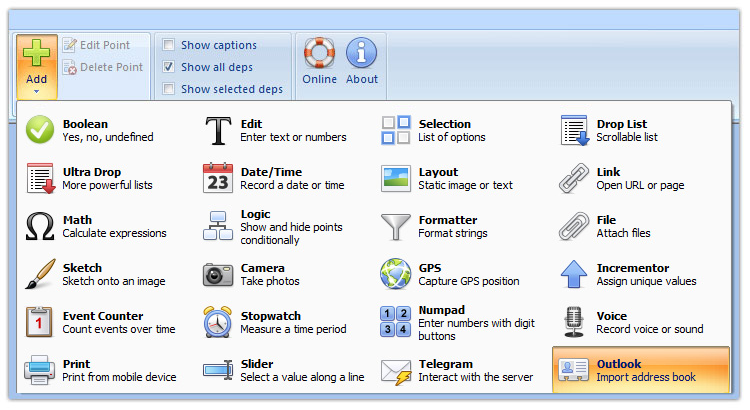 The Mobile Data Client for Windows 10 Tablets supports an additional five points relative to Android and Apple clients; being the Outlook, Voice, Stopwatch, Event Counter and Slider points. The Outlook point in particular, interfacing with  Office Outlook, is useful on Windows 10 Tablets.

Past Versions of Mobile Data Studio

Mobile Data Studio 8.0 (MDS 8) presents a new user interface, redesigned database to enable search (filter) and sort functions, processing of data to maps, improved management of projects by TCP/IP wireless, new URL for Parent project to send all opened sessions in a Child or another project to MDS server, and improved processing of data to Excel.

Please see features of upgrade below, also noting 'Fixes and other Information' below, and review the Mobile Data Studio Skills tutorial for detail.

MDS 8 presents with a revised user interface in contemporary Windows style and suited to high resolution computer screens. The original 'five icons' view of Properties, Design, Install, Synchronise and Database for an open project has been relocated to the top toolbar in MDS 8. Click on the round MDS icon button in the top left to open and save projects, and for quick access to Settings for wireless TCP/IP Set Up and Auto Load of projects. 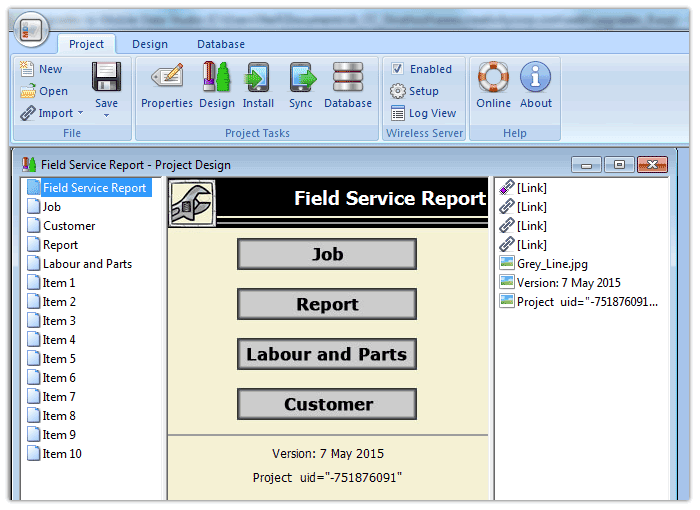 The Mobile Data Studio server side Database has been rebuilt to support Search, Filter and Sort functions and provide greater capacity; see image below. Project databases have associated Data .ppd and Data Pathway .ppr files, the previous data Index .ppi file has been left behind. Previous Mobile Data Studio versions session data opened in version 8 is converted to the new format. A new Search and Filter function searches data within project points by either 'Exact match' of values or 'contains' values and the sessions are presented filtered from the total database. The filtered outcome is shown in a bar across the top of the sessions and return to the full database is by click on red X at top right. The Search function is accessed via either the Database top toolbar 'Search' button, right click of mouse and Database menu, or 'Ctrl F' in Database mode. A new session Sort function operates by click to top or side of point columns or rows (except GUID). The Sort function follows the standard Windows process where clicking on the column header once sorts in ascending order, and clicking on the same header again sorts in reverse order. By default sorting is alphabetical; however, by doing a Shift + click the sort is numeric instead, useful to sort numbers such as '1, 02, 10' which would by the alphabetical method sort as '02, 1, 10'. As advised above, session databases from current MDS version 7.3.2 opened in MDS 8 cannot be returned to MDS 7.3.2. 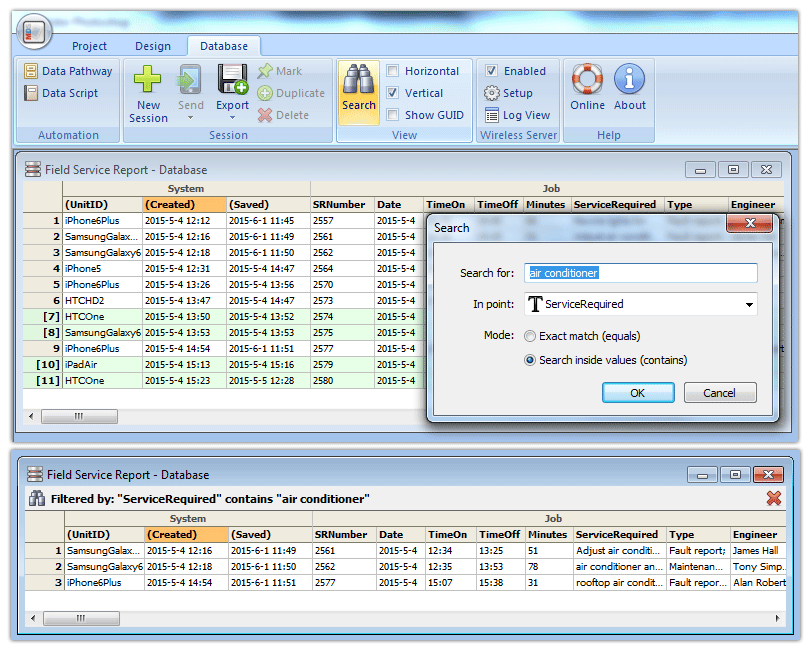 Export Session Data as KML and KMZ files for Maps

Session data containing GPS values can now be processed to KML and KMZ files to display data and images in Google Earth and other mapping media. A KMZ file can contain images, whereas a KML file doesn't contain images. Shown below is the KML/KMZ Output Options window for KLM/KMZ files and part of a displaying screen in Google Earth in Windows 7. The format used in the GPS point must be decimal Latitude (%lat%) and Longitude (%long%). If images are to be output in KMZ files then the Filename extension must be specified as .kmz. Sessions can be grouped in the Database Window to Export either a KML or KMZ file which will display multiple GPS locations and associated data. Individual sessions can be automatically processed to KML/KMZ via the Data Pathway alongside data using ADO to databases and XML Outgoing. 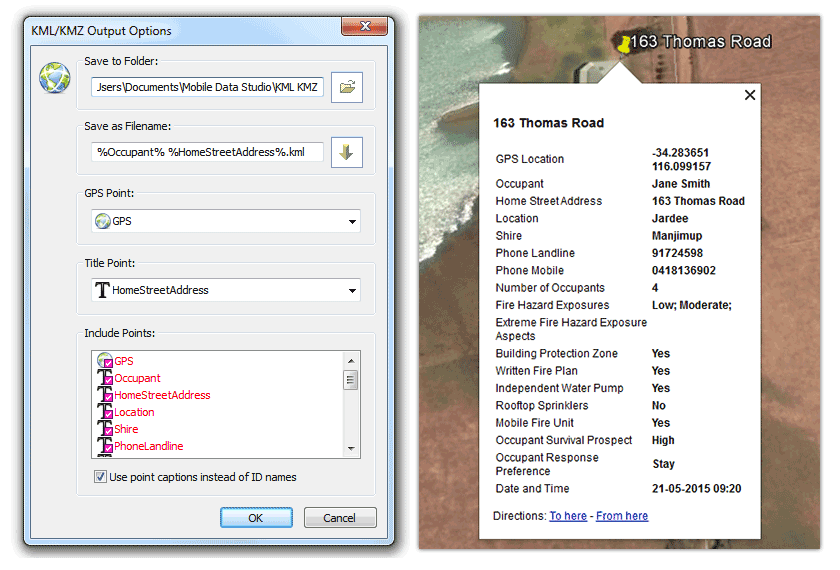 KML files can be sent to Apple iOS and Android mobile devices via email, and via the File point in Android. Note that to open KML files in Android transported via the File point the KML Filename may require to be without spaces. KMZ files display associated images in Google Earth in Windows on a desktop or laptop PC; however, images will not display in Apple iOS or Android. An example below shows a KML file generated from the Bushfire Ready Map project ( in C:\Program Files (x86)\Mobile Data Studio\Examples) displayed on an Apple iPad with the Title Point being the 'Occupant Response Preference' to either 'Stay' or 'Go' in response to a bushfire. Similarly, session data processed to KML in a survey of maternal and child health in a developing country could show which dwellings had a child under the age of five years. A survey of electricity power poles in a network could show which poles required priority maintenance. A tap on the marker pin then shows full information. 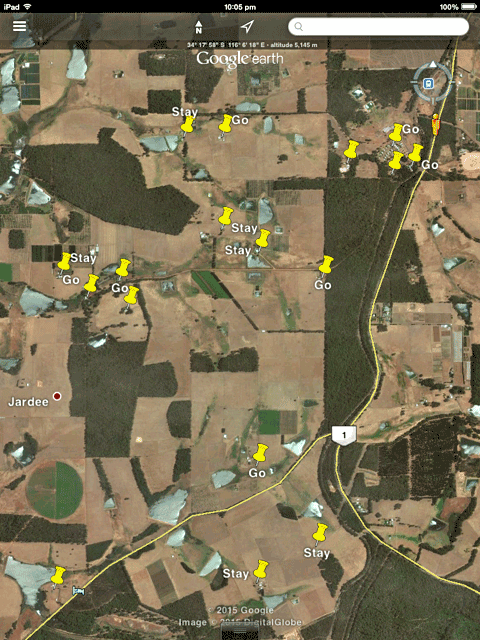 Below is an example of export of a session to KMZ file and display in Google Earth in Windows 7, using the Track Assets project (in C:\Program Files (x86)\Mobile Data Studio\Examples). A single image is shown; however, multiple images are supported within a KMZ file. 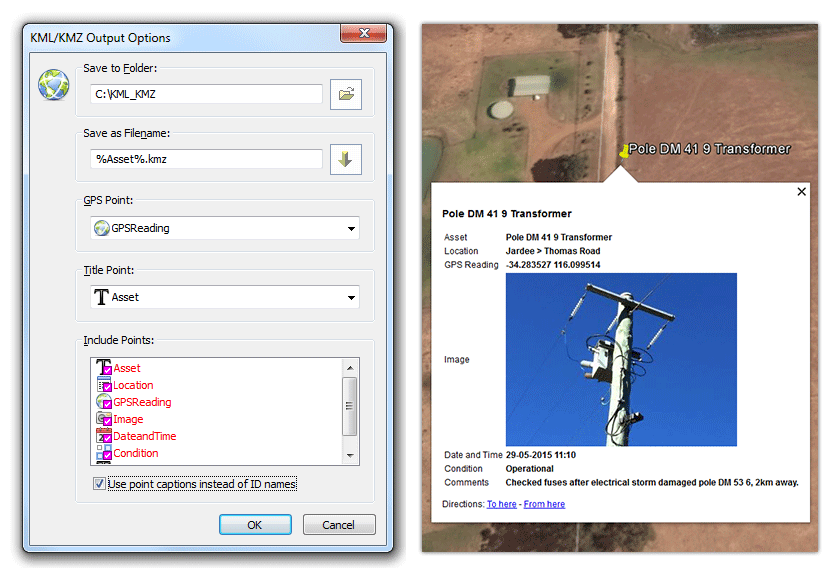 The projects installed on a mobile client can now be viewed from the server using the wireless Activity Monitor (Log View) and selection of the mobile client and Properties; see example below. To complement this convenient information on mobile deployments, the project Auto Load function, accessed via Setup, now has an additional function to 'Automatically install this project on connecting devices'. When a project or projects are selected for this function the designated project or projects will install to mobile clients on first connection to the Mobile Data Studio server, see example below. The installation of the project can be tracked via the Activity Monitor and text Log file; the installed project will also show in mobile client Properties on next connection. After the initial install of a new project to a mobile client, subsequent updates to the project will present as optional to the mobile client user, per current practice.

The powerful URL Scheme functions that are applied via the Link point have been improved generally and specifically to enable a project to send all opened sessions in another project to the Mobile Data Studio server.

The URL to send all opened sessions in, for example, a Child project is mds:///send/sessions?project=Child.ppc and it can be actioned from any project directed at another. For example in a hierachy series of three projects the third project could action send of sessions from the two projects above it in a series.

Download demonstration Parent and Child projects to test the functions shown in screenshots below, along with a document providing the URLs used in Link points.